(If you want to have a little fun, you can search this: 'edgar cayce russia will be freedom'. According to Cayce, Russia would become a beacon of freedom - in addition to fighting the Antichrist in WW3 and all that)...

If you want direct confirmation that MSNBC perpetrates fake news, then listen to Ed Schultz who used to host a show at that network. In an podcast interview with Jamie Weinstein of the National Revew , Schultz claimed that the president of MSNBC contacted him just minutes before he was due to broadcast the official kickoff of the Bernie Sanders presidential campaign and demanded he cover another topic instead.

Start the conversation, or Read more at NewsBusters.org. 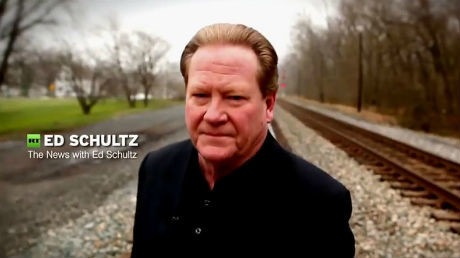 The most important post you will ever ignore... [This is a personal post with an eye to letting it at least be viewed by folks over at

so_very_doomed, and one or two of my own communities]...

( Collapse ) That's what I always say.

Image of three red unidentified lights in triangular pattern and pale shaft of low, rainy fog that appeared right after loud boom at approximately 8 PM on April 14, 2013, southwest of San Diego in the City of Imperial Beach, California.

I sure hope there is not Nether-stress this weekend cuz I'm only beginning to recover from a few weeks ago, and yesterday there was banging on the walls below my bedroom, although I allowed that it could have been hammer+nail, to do with windows and spring... I probably won't be going anywhere until early next week, so I am stuck here inside, which, of course, appears cowardly.

On w/ this little post: Here is info, etc., on that comet I have mentioned several times...

A recently discovered comet will make an uncomfortably-close planetary flyby next year — but this time it’s not Earth that’s in the cosmic crosshairs.

According to preliminary orbital prediction models, comet C/2013 A1 will buzz Mars on Oct. 19, 2014. The icy interloper is thought to originate from the Oort Cloud — a hypothetical region surrounding the solar system containing countless billions of cometary nuclei that were outcast from the primordial solar system billions of years ago.

So, maybe it will hit a planet, who knows, probably not. The bigger danger is if it channels an electromagnetic plasma arc between planets and(or) the sun. Worst case scenario: This arc hits us, or the comet hits us. Why is catastrophe worth considering? Because it is always worth considering. Hope for the best, plan for the worst. ETERNAL VIGILANCE. Etc. But also, two other things: Behaviour of US and world governments can be interpreted as perhaps preparing for some such cataclysm. This is MERELY ONE HYPOTHESIS. But, it does say, "keep an eye on this comet".

The second reason to keep and eye on it, besides very weird events here on Earth and in astronomy, is that there has been a lot of airy speculation of a "Planet X" due to swing by - but the espousers of this theory got the date wrong - and yet that doesn't count as much as I once thought it does, in visions. You can get crazies and psychos, and most of their visions are wrong or way off, but there are a handful of people who have visions which filter out through dream imagery, and they are sometimes correct, if interpretted like dreams, and such. E.g., Edgar Casey(sp). We'll know soon enough if this approaching comet is gigantic enough to warrant being compared to the mythical "Planet X". Of course, I doubt it. I'm just saying, it is just another loose reason to keep an eye on this approaching comet. And, there may also be paranormal suggestions of some approaching trouble, not associated with the "Planet X" prophesies. Btw - the whole Sitchin ANANNOKI, etc., mythology surround Planet X is just plain so much roughage - completely indigestible... And, more about "Planet X"... The 1983 announcement of some gigantic planet existing way out on the edge of the solar system was immediately retracted, which Planet X-ers saw as a huge COVER-UP. But here's how WikiPedia addresses that issue:

Many believers in the imminent approach of Planet X/Nibiru accuse NASA of deliberately covering up visual evidence of its existence.[25] One such accusation involves the IRAS infrared space observatory, launched in 1983. The satellite briefly made headlines due to an "unknown object" that was at first described as "possibly as large as the giant planet Jupiter and possibly so close to Earth that it would be part of this Solar System".[26] This newspaper article has been cited by proponents of the Nibiru cataclysm, beginning with Lieder herself, as evidence for the existence of Nibiru.[27] However, further analysis revealed that of several initially unidentified objects, nine were distant galaxies and the tenth was "intergalactic cirrus"; none were found to be Solar System bodies.[28] - - - https://en.wikipedia.org/wiki/Nibiru_collision

Note, however, that Earth magnetic pole instability, and eventual shift, is not something to dismiss as impossible. (Eventually, a pole shift SHALL happen, btw). This is a separate issue, especially from Planet X "theory".