This is wild. It is a sad, far cry from the times of The High Niall, or the Nine Hostages...  Ah, wilderness! To wit, Wiki:

...O'Neill was sent to St. Aloysius Academy for Boys, a Catholic boarding school in the Riverdale section of the Bronx, where he found his only solace in books.[citation needed] His father suffered from alcoholism; his mother from an addiction to morphine, prescribed to relieve the pains of the difficult birth of her third son, Eugene.[7]

The O'Neill family reunited for summers at the Monte Cristo Cottage in New London, Connecticut. He also briefly attended Betts Academy in Stamford.[8] He attended Princeton University for one year. Accounts vary as to why he left. He may have been dropped for attending too few classes,[9] been suspended for "conduct code violations,"[10] or "for breaking a window",[11] or according to a more concrete but possibly apocryphal account, because he threw "a beer bottle into the window of Professor Woodrow Wilson", the future president of the United States.[12]

O'Neill spent several years at sea, during which he suffered from depression and alcoholism...  O'Neill's parents and elder brother Jamie (who drank himself to death at the age of 45) died within three years of one another, not long after he had begun to make his mark in the theater.

In their first years together, Monterey organized O'Neill's life, enabling him to devote himself to writing. She later became addicted to potassium bromide, and the marriage deteriorated, resulting in a number of separations, although they never divorced.

In 1943, O'Neill disowned his daughter Oona for marrying the English actor, director, and producer Charlie Chaplin when she was 18 and Chaplin was 54. He never saw Oona again... 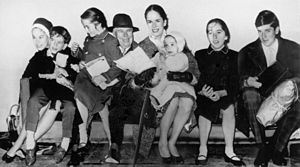 The Chaplins and six of their eight children in 1961. From left to right: Geraldine, Eugene, Victoria, Chaplin, Oona O'Neill, Annette, Josephine and Michael.
He also had distant relationships with his sons. Eugene O'Neill Jr., a Yale classicist, suffered from alcoholism and committed suicide in 1950 at the age of 40. Shane O'Neill became a heroin addict and moved into the family home in Bermuda, Spithead, with his new wife, where he supported himself by selling off the furnishings. He was disowned by his father before also committing suicide (by jumping out of a window) a number of years later.

After suffering from multiple health problems (including depression and alcoholism) over many years, O'Neill ultimately faced a severe Parkinsons-like tremor in his hands which made it impossible for him to write during the last 10 years of his life; he had tried using dictation but found himself unable to compose in that way....


mm101 Note:  Isn't this bizarre? Also, Jack Nicholson portrayed O'Neill in, "Reds" - which seems to be part of some kind of conspiracy - to portray Irish people with actors who don't look, in the slightest, Irish!  I am noticing examples everywhere. Like: We are supposed to believe Hillary Swank is Irish, (in, P.S. I Love You)?! Crazy.
Tags: crazy people - irish, o'neill - eugene o'neill, playwrites, tragedy of being irish, tragi-comic / bittersweet
Subscribe