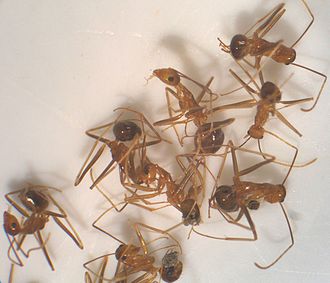 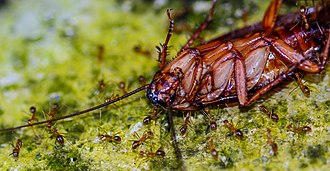 The impact of crazy ants on the biodiversity of Christmas Island has been profound.[14]

The crazy ant has a significant destructive impact on the island's ecosystem, killing and displacing crabs on the forest floor. The super-colonies also devastate crab numbers migrating to the coast. This has seen a rapid depletion in the number of land crabs, which are vital to Christmas Island's biodiversity - land crabs are a keystone species in the forest ecology: they dig burrows, turn over the soil, and fertilize it with their droppings.[19]

Seedlings that were previously eaten by crabs started to grow and, as a result, changed the structure of the forest. Weeds also spread into the rainforest because there are no crabs to control them. One of the most noticeable changes in the forest is the increased numbers of the stinging tree Dendrocnide peltata, which now flourishes in many areas frequently visited by humans. The forest canopy also changed as the scale insects tended by yellow crazy ants multiplied and killed mature trees.[20][21]

Robber crabs, red crabs, and blue crabs are completely wiped out from infested areas. Populations of other ground and canopy dwelling animals, such as reptiles and other leaf litter fauna, have also decreased. During crab migrations, many crabs move through areas infested with ants and are killed. Studies show that the ant has displaced an estimated 15-20 million crabs by occupying their burrows, killing and eating resident crabs, and using their burrows as nest sites. This factor has greatly depleted red crabs, and made their annual land migrations far more perilous.[22][23][24]

NOTE: Even though the Red (and 'Robber') Crab is essential to the ecology of Christmas Island, the crab's population in recent decades has been unusually large, due to the extinction of its only previous predator, the Maclear's Rat - a rat which was indigenous to the island.  (Usually, it has been the imported (Norway) rat which has been responsible for the extinction of indigenous species elsewhere).  Also, I have a nephew who says he has a yellow crazy aunt.
Tags: animals - crabs, animals - insects - ants, animals - invasive species, islands - christmas island
Subscribe