I was thinking of writing a little about Christian / narcissism, and then came across this, which will be an introduction, I reckons. The county and town are highly German. If they ended up w/ over 10% blacks, you would see a lot of racism problems, which you don't see now because everything is so idyllically white.

[Note - I have been having yet more brain probs today. It is almost tempting to drink just to bury the pain but that will only make it worse. One of these days, I'll be able to write and live as I will... At least I have peppermint oil now, for my mocha, which is theoretically good for head problems - except for mine which are completely out of the ballpark]. 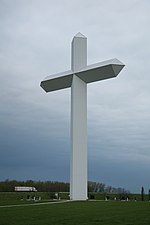 A 198-foot (60 m) steel cross erected by The Cross Foundation is located in Effingham. The Cross is made out of over 180 tons of steel and cost over $1 million.[20] The Cross Foundation claims that the cross is the "largest" in the United States standing at 198-foot (60 m) with a span of 113-foot (34 m).[21] While the 208-foot (63 m) Great Cross in St. Augustine, Florida is believed to be the tallest freestanding cross in the western hemisphere, it is thinner than the cross in Effingham and has a narrow span.[21][22]

One resident complained that using a Christian symbol to attract tourism "reeks of avarice and hypocrisy." Another pointed out that the money that built the cross, which was collected through private donations, could have fed the poor and done other good for the community that wasn't simply "over-the-top symbolism." Philip Coats of the Cross Foundation said there was barely a ripple of criticism in the town. John Schultz, the donor who put up most of the money for the project, said, "I guess you can't satisfy everybody."[21]