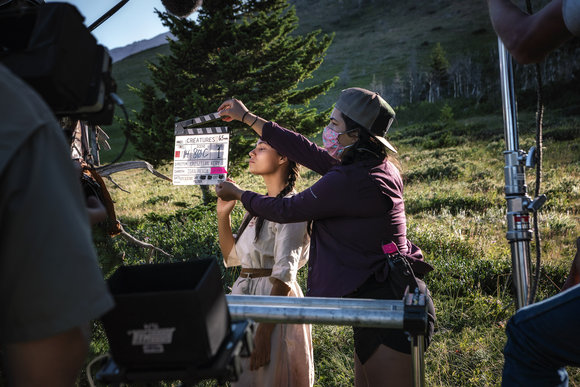 - “ Creatures” is a film about the 1700’s North American Smallpox Outbreak.
- It is being filmed in Montana on the Blackfeet Reservation.
- Shooting is to wrap during the 2nd week of August.
- They’re aiming for a Winter 2020 international release - both in theaters & through streaming.
- The story is told through “several youths from warring tribes who wrestle with the spread of the disease and the introduction of the horse, called "Creatures," that hold the promise of power.”

"Our film follows the story of one Blackfeet man and his response to the same kind of issues that we, as a unified American people, are addressing today: how do you collectively manage a mysterious and deadly pathogen that rapidly spreads from person to person? The Blackfeet Nation has kept these stories alive for generations and now we are sharing them with the rest of the world. If there is one lesson that our past holds for this future generation, it's that fear is the deadliest weapon of all. "Conquer that, and logic will save you," says Pat "Judge" Hall, Producer and Locations and Wrangler for Creatures.”

Fair Wayne Bryant was sentenced to life in prison in 1997 for attempted simple burglary, and justices rejected his recent appeal

A black man in Louisiana will continue to serve a life sentence in prison for trying to steal hedge clippers after the state supreme court denied a request to review his sentence.

Fair Wayne Bryant was convicted in 1997 of attempted simple burglary.

NOTE: This is crazy and retarded.  It appears to be a real example of injustice, which you know I oppose everywhere.  Complete unfounded.  It comes from the state of Louisiana, which is a fulcrum of stupidity, and also the place where toppling statues and take-a-knee began.  But the whole country is not Louisiana.  In addition to this, this reminded me of a friend who stole my wonderful lawn-mower.  What sentence does he get?  He was a communist, Antifa agitator, whom I have tracked from Louisiana to the West coast - possibly paid directly from Soros - and, of course, WHITE.  Using my lawn mower based on the idiotic premise that he deserved it because of my white privilege, so he could make money!  Like a capitalist!  Gag me with a spoon!

I consider this the same injustice that destroyed my tires and car, and burnt down my garage, and forced me out of a home bequeathed to me. It is all the same fucking bullshit. Most human beings are like ants dancing and dying beneath a magnifying glass.  Oh, the glory of it.  They are like a fingernail bugger-flip against the span of eternity - against the vastness of this infinite creation.  The arrogance of man.  The only way we can come anywhere close to this grand creation is by putting our animality behind us and transcending into so much greater.  Do I need to enumerate these values?  Not at this point.