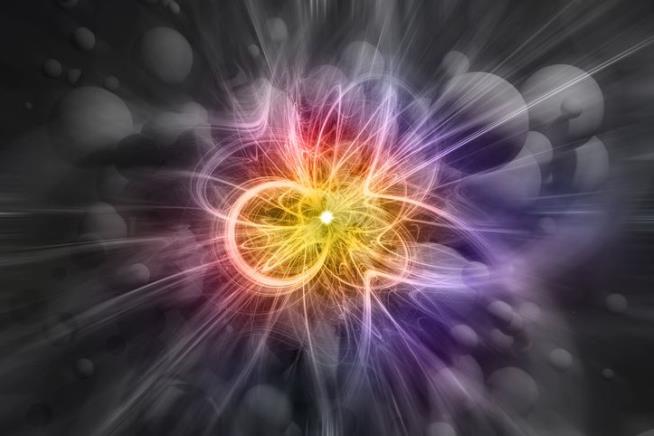 (Newser) – They're calling it X17—and it might help solve a great mystery of nature. Scientists in Hungary say they've twice stumbled on the previously unknown particle while seeking evidence of a "fifth force" guiding our visible universe, CNN reports. "X17 could be a particle, which connects our visible world with the dark matter," says lead scientist Attila Krasznahorkay. The team first spotted evidence of X17 three years ago when observing electrons and positrons break off at unexpected angles from a decaying isotope of beryllium. Now, with some calling that a lab error, the scientists announced a similar find in the breakup of an excited helium atom. "This would be a no-brainer Nobel Prize" if accurate, says US physics professor Jonathan Feng. But what does it all mean?

Four known forces are running the visible universe—gravity, electromagnetism, and the strong and weak nuclear forces—but scientists have been seeking evidence of a "fifth force" to explain dark matter, which invisibly makes up most of the universe, and fulfill Albert Einstein's dream of building a "unified field theory" to explain all existence. Enter X17, whose unusual mass (17 megaelectronvolts) and blink-of-an-eye lifespan (less of a trillionth of a second) tell us it can't be a particle carrying the four established forces, per Science Alert. Which leaves ... what, exactly? Maybe a glimpse beyond the visible universe. And there's "no reason to stop at the fifth" force, adds Feng. "There could be a sixth, seventh, and eighth force." (Read more dark matter stories.)

I really don't see myself doing the long trek today.  I wanted to avoid the snow...  Small possibility I can do the bushes later.

I had d ream that I got a hand-addressed piece of mail from some old friend - can't recall who.  I was delighted.  Today, I got 5 pieces of mail, all legitimate.  Three involved CFS - two being fundraisers - (like we can really help).  My electric bill was a nice surprise.  My last payment was $75 effing dollars - but this month the bill is only $50.  Apparently, I used less electricity in 'November' than in any other month since at least October 2018.  I don't know how this happened.  No longer using AC, of course.  But I have been using my electric heater a little.  It uses a lot of electricity.  I guess it is because I am using the gas to reach into the back room, leaving the door open.  Still did normal amount of cooking.  But less time blasting radios at the aggressor.  Not really sure.

Because of Karmic irony, however, I got charged $23 interest on my credit card.  The first time ever.  I make at least two big payments per month, and this is supposed to eliminate interest charges.  I need to call the bank and ask them why they charged me.  It's like a fricken pay-day loan charge.   How am I supposed to send you all turkeys when I can barely even afford clothes for my dog?

My water bill has become insanely high, due to capital improvements, and yet I still need to pay them to fill my body with toxic fluoride and other chemicals.  I have to pay for garbage disposal even though I seldom need to use it.    Even though I use 'greywater' to flush the toilet, it makes no difference - because the actual price of water, per se, is minuscule, compared to the other charges.  How much does a well cost, living out in the country?  How about a compost pit?  How much do you get charged each month when you use solar and wind power?  They are making chumps out of us, especially the poor.

And who needs all this plastic!

Oh - and my phone bill is now around $80 a month - which is twenty dollars more than it was when I started w/ it.  That's crazy - for just a land-line, w/ no long distance calls?!  (LD calls are free on it though, so I can call any of you in the States).  This charge is despite the fact that I stopped using call-trace,  ($3 per call!), and took my name off the unlisted status, (over $6 per month!)  Explain to me why they charge NOT to list your number - other than they can't sell your info on a list.

It's like when a new chain took over my other bank, and started charging me $3 a month because I had been receiving paper statements.  Paper statements don't cost them that much!  It was a backup account with less than $100 in it - but I lost about $20 in it, due to this new charge.  Wasn't able to get to the library, etc., to access their website.  Everyone cares about providing ramps for people in expensive wheelchairs, but no one gives a shit about the limitations of people w/ CFS.

How are you supposed to progress in life, especially out of illness, when you are forced to scrape by, on a fixed income, in a country where rents bizarrely remain too high for most of the population to afford? You end up getting stuck in a neighbourhood full of losers and lunatics, full of crime, cockroaches, mice, raccoons, pitt-bulls, next to a toxic highway, and out of reach of healthy food.

You end up taking a retarded bus company which takes 45 minutes to drop you off, and is full of morons who go out of their way to disrespect you. You are driven over broken roads. You pass businesses and houses with 'for rent' and 'for sale' signs up. But no one thinks to lower their rents to bring in renters. Landlords would do better to rent a place out for $5 a month, rather than let the place sit and rot. But that is not the mentality of this top-down, competitive, me-first society. I see social and business interactions all over the place, where individuals, as agents of society, are all shooting society in the foot. It is pathetic tragedy. Lets watch false narratives and endless trials, while the whole country is bought up, and done in, by China. I don't want to sail on this ship of fools.