A hot, dry summer means this year’s harvest will be early. Once the fields have been harvested, the hunters will start to gather in secret to carry out something so heinous that it’s difficult to talk about - but needs must. 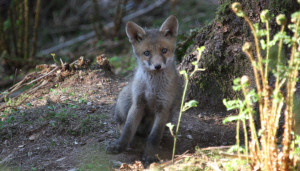 Hunt groups call it ‘autumn hunting’, but we know it’s cover for something much worse; cub hunting. Up to 10,000 foxes are killed every year in the name of ‘cub hunting’.
It’s just not natural for hounds to kill cubs. These hunts are specifically designed to teach them how to kill as training for the main hunt activities. Those who don’t perform to the expected standard are destroyed, resulting in even more senseless death of animals. It’s estimated that 5,000 hounds are killed each year due to their lack of suitability for fox hunting.

You can help support the Animal Crimewatch hotline and Intelligence Team during cub hunting season.

The Animal Crimewatch hotline allows the League Against Cruel Sports to catalogue every reported instance of suspected animal abuse in the name of ‘sport’. They have already started receiving calls from concerned people who have seen signs of cub hunting taking place where they live.

More information on how you can  help, here: https://www.league.org.uk