It is not possible for me to take a political side concerning the issue of illegal immigration. Not only is the issue more complex than is presented, both Dems and GOPpers disingenuously use it for political advantage, even as both parties secretly want illegal immigration to continue, if not to increase. Add to that a more global context, and the whole thing requires more deliberate discussion and management.

I hope to discuss immigration in a later post. While I do not take sides, I do agree that some children are being caught in an official web of dysfunction and corruption. Previously, some of them have been sold off to global sex traffickers. So, in this present post, I just want to convey that children are suffering from this - as well as from the wars and crimes they are fleeing.

What is causing these cauldrons of turmoil, in the first place? Climate change. Past corporate and CIA destabilisations of Central American Countries. (Same thing happened in Syria, Libya, etc.) A wanton desire in the West for drugs and pedophilia.

And, in the USA, there are enticements for victims to immigrate here - including job offers illegally plastered all over Tijuana by USA businesses, which, of course, extend poor pay and conditions.

This issue is a perfect example of how our system DOESN'T work. Or - how our system works for the rich, deceitful or criminal, but not for us, and not for the innocent. It is also a harbinger of harder times ahead.

The Trump Administration, because of its fundamentalist change of policy, found itself caught in a trap that was inherent in the ongoing immigration problem. It was a trap for children, as well. This administration has been making progress in reuniting several immigrant children with their families, where this was possible.  -  Judge: 'Great progress' reuniting families split at border

Migrant Children Detained in Shelters Being Drugged, Told Not to Hug, Forced to Bathe in Sinks 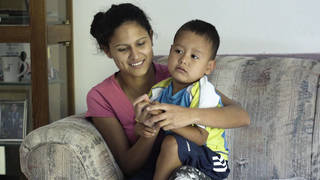 “His behavior is really aggressive,” she says. “He wasn't like this before. … He’s violent, more than anything else.”

Violence, poverty and politics: Why Hondurans are escaping to the U.S.

The heartbreaking violence that’s become a daily occurrence in Honduras is regularly presented as a result of gangs and drugs — with victims chosen at random. But this problem cannot be understood without accounting for the current political climate. With farmers’ associations, indigenous activists and multinational companies at odds, victims are often targeted because of their occupations. These victims have included media professionals, human rights defenders, lawyers, peasant group workers and activists in the political opposition. The country’s already high rate of violent crime rose sharply after the 2009 coup d’état and has remained at record levels ever since. Commentators are certainly correct that violence is spurring many Hondurans to flee for other countries, mostly Mexico and the United States, but they often miss that it’s inextricably linked to a toxic political situation.

Brazilian student, 3 others killed in Nicaragua amid unrest

Nicaragua: what's driving the uprising and what comes next?
Collapse