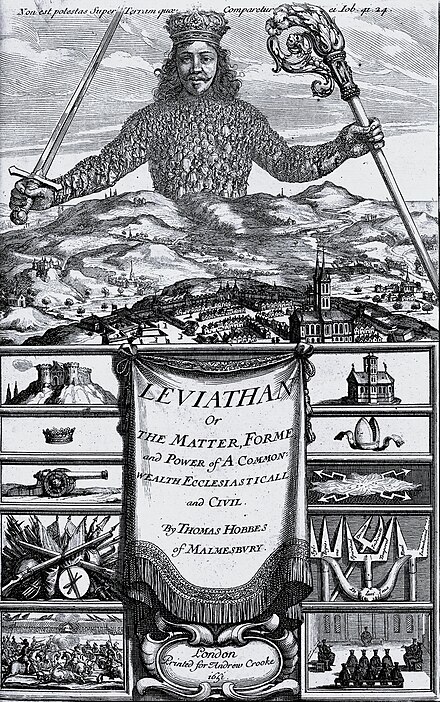 Social contract formulations are preserved in many of the world's oldest records.[5] The Buddhist text of the second century BCE, Mahāvastu, recounts the legend of Mahasammata. The story goes as follows:

In the early days of the cosmic cycle mankind lived on an immaterial plane, dancing on air in a sort of fairyland, where there was no need of food or clothing, and no private property, family, government or laws. Then gradually the process of cosmic decay began its work, and mankind became earthbound, and felt the need of food and shelter. As men lost their primeval glory, distinctions of class arose, and they entered into agreements with one another, accepting the institution of private property and the family. With this theft, murder, adultery, and other crime began, and so the people met together and decided to appoint one man from among them to maintain order in return for a share of the produce of their fields and herds. He was called "the Great Chosen One" (Mahasammata), and he received the title of raja because he pleased the people.[6]

John Locke (1689), and Jean-Jacques Rousseau (1762), have argued that we gain civil rights in return for accepting the obligation to respect and defend the rights of others, giving up some freedoms to do so. The central assertion of social contract approaches is that law and political order are not natural, but are instead human creations. The social contract and the political order it creates are simply the means towards an end—the benefit of the individuals involved—and legitimate only to the extent that they fulfill their part of the agreement. According to Hobbes (in whose view government is not a party to the original contract) citizens are not obligated to submit to the government when it is too weak to act effectively to suppress factionalism and civil unrest. According to other social contract theorists, when the government fails to secure their natural rights (Locke) or satisfy the best interests of society (called the "general will" in Rousseau), citizens can withdraw their obligation to obey, or change the leadership through elections or other means including, when necessary, violence.

The Social Contract by Jean-Jacques Rousseau - (1762)

Locke believed that natural rights were inalienable, and that the rule of God therefore superseded government authority, and Rousseau believed that democracy (self-rule) was the best way of ensuring the general welfare while maintaining individual freedom under the rule of law. The Lockean concept of the social contract was invoked in the United States Declaration of Independence. Social contract theories were eclipsed in the 19th century in favor of utilitarianism, Hegelianism, and Marxism, and were revived in the 20th century, notably in the form of a thought experiment by John Rawls.[3]

Building on the work of Immanuel Kant with its presumption of limits on the state,[12] John Rawls (1921–2002), in A Theory of Justice (1971), proposed a contractarian approach whereby rational people in a hypothetical "original position" would set aside their individual preferences and capacities under a "veil of ignorance" and agree to certain general principles of justice and legal organization. This idea is also used as a game-theoretical formalization of the notion of fairness.

How the Iroquois Contributed to the Confederation of Canada

Realizing the Social Contract: The Case of Colonialism and Indigenous Peoples

The Social Contract at Work - The Psychology of Well-Being

The Social Contract of the Firm - Economics, Ethics and Organization

Thoreau, in contrast, was both shocked and scandalized when he visited the village from Walden one day in 1846 and found his neighbors enthusiastically preparing for the newly declared Mexican War. Thoreau regarded this war as nothing but an ignoble effort on the part of proslavery forces in Congress to build up their voting strength by annexing Texas. When asked for payment of his annual poll tax—much needed this year, he was told, because of the war effort—he refused. The constable, a longtime friend, told Thoreau he had no interest in locking him up and would pay the tax for him if Thoreau could not raise the necessary funds. Again Thoreau refused, and this time he was jailed. Within 24 hours, his tax had been paid against his will by members of his family, so he spent only one night in prison. That one night was sufficient time, however, for him to gather his thoughts on the proper relationship of the individual to the state.

Two years later, he committed these thoughts to paper for a lecture he called “The Rights and Duties of the Individual in Relation to Government,” which was subsequently published as “Resistance to Civil Government” (1849) and finally as “Civil Disobedience” (1866), the title under which we know it today. Thoreau begins his famous essay by inquiring into the nature and justification of the state.

In the interim, Thoreau argued, until such time as we are fully prepared for a government that “governs not at all,” we should live peaceably with the state—unless and until it adopts policies that require us to participate in or assist with the perpetration of injustice. At that point, Thoreau asserts, it is incumbent on every moral person to refuse cooperation with the state. So, in light of the persistence of slavery and the waging of the Mexican War, “[h]ow does it become a man to behave toward this American government today? I answer that he cannot without disgrace be associated with it.” As for Thoreau, not only did he refuse to pay his taxes; not only did he write that “I cannot for an instant recognize that political organization as my government which is the slave’s government also”; in addition, he recorded in his journal that “[m]y thoughts are murder to the State; I endeavor in vain to observe nature; my thoughts involuntarily go plotting against the State. I trust that all just men will conspire.”