Days of Anarchy and Tulip Mania.

May1 was, of course, the internationally celebrated day of rights for labour and unions, which is supported by everyone from Democrats and Greens to Commies and Anarchists.  Many important labor and political protests have occurred in history on, or around, this date.  The United States has confused things for Americans, by creating the alternate, Labor Day, a day for celebrating hot dogs.

May 1, 1637, was about when the great Tulip Mania Bubble crashed in Europe - something we should all study.  (See also: Extraordinary Popular Delusions and the Madness of Crowds).

Today, May 5 is, of course, Cinco de Mayo, the day celebrating a Mexican military victory over those damn Frenchies in 1862.  This followed the Mexican-American War, and the church-vs-state Reform War, which indirectly precipitated our Civil War somewhat, and sent Mexico into bankruptcy.  France not only demanded it's debt be paid, but also wanted a new empire in Mexico.  Ain't that always the way?  Mexico, once a Spanish colonisation of former Aztecs, et al, went on to give us wonderful Mexican music reprocessed from German Polkas, and became an ally of Adolph Hitler in WWII.  (Instead of dealing with that, we interned Japanese Americans - and some Germans).  Cinco de Mayo has become an international celebration of Mexican culture, but also of Latin American culture, cuz, why not?  People who eat hot dogs on this day may be shot.  French fries?  Definitely.

Yesterday was May 4, an important day in history, as well.  In 2007, a massive tornado hit the tiny town of Greensburg, KS, which has, through its recovery, become one of the most progressively green communities in the country.

The Kent State massacre: In 1970, several innocent students were shot by police during a protest against Nixon's war campaign in Cambodia.

And, in 1886, the The Haymarket Affair occurred in Chicago, (8 years before the Pullman strike there), over violent abuse by the police during a labour strike.  At least 7 anarchists were blamed and executed for the subsequent bombing, but no one really knows who was responsible - they had agents de provocateurs even back then.  Anyway, the Haymarket affair not only contributed to the establishment of May 1 as an international day of labour, it also seems to have been exploited first as a popular Anarchist Scare, and then as the Commie Scare which got us all by until 9/11/2001.  Back in 1886, the term, "Anarchist," seems to have been applied loosely, to any number of politically-striped anti-corporationers, like socialists, or Germans, or blacks, or Jews, whatever.  It was a coded buzz-word, just like, "conspiracy theorist," is today.  And today, the NEW Red Anarchists are Wikipedia and the Putinistas, lol.  (See also my tags for other labour/union events influencing May 1 and Labor Day). 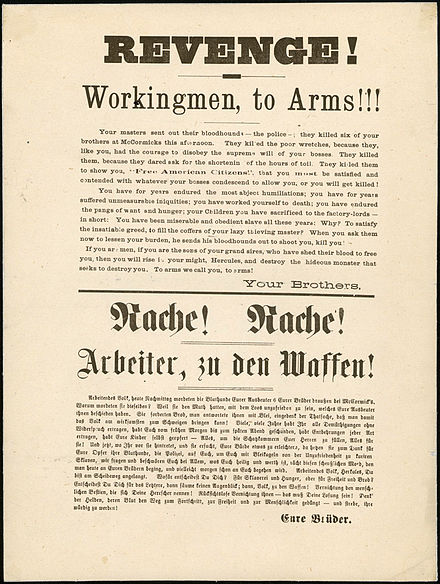 The Haymarket affair (also known as the Haymarket massacre or Haymarket riot) was the aftermath of a bombing that took place at a labor demonstration on Tuesday May 4, 1886, at Haymarket Square[2] in Chicago. It began as a peaceful rally in support of workers striking for an eight-hour day and in reaction to the killing of several workers the previous day by the police. An unknown person threw a dynamite bomb at police as they acted to disperse the public meeting. The bomb blast and ensuing gunfire resulted in the deaths of seven police officers and at least four civilians; scores of others were wounded.

In the internationally publicized legal proceedings that followed, eight anarchists were convicted of conspiracy. The evidence was that one of the defendants may have built the bomb, but none of those on trial had thrown it.[3][4][5][6] Seven were sentenced to death and one to a term of 15 years in prison. The death sentences of two of the defendants were commuted by Illinois governor Richard J. Oglesby to terms of life in prison, and another committed suicide in jail rather than face the gallows. The other four were hanged on November 11, 1887. In 1893, Illinois's new governor John Peter Altgeld pardoned the remaining defendants and criticized the trial.

The Haymarket affair is generally considered significant as the origin of international May Day observances for workers.[7][8] The site of the incident was designated a Chicago Landmark in 1992,[9] and a public sculpture was dedicated there in 2004. In addition, the Haymarket Martyrs' Monument at the defendants' burial site in nearby Forest Park was designated a National Historic Landmark in 1997.[10]